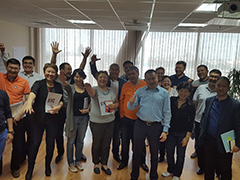 The initiative to hold the activities of internal education belongs to the experts for corporate development of the company. The staff of the company as well as its management supported the proposal and expressed their willingness to participate.

The uniqueness of the initiative lies in the fact that the series of training courses for the staff training will be carried out through the internal human resources of the company. That is, in simple terms, the heads of the departments will train the company’s staff, each in his own direction, which in its turn reduces the cost of such activities to a minimum.

The first such training was held in May 2016. The training was aimed at improving the interaction between the structural divisions of the company. The executive director for strategic development Makan K.B. acted as a coach of the event. During the training, in addition to basic practical exercises to strengthen the team spirit, the staff assessed the level of the work being done in the company, voiced their suggestions for improvement and having co-divided into teams solved complex logical problems.

According to the internal training plan the activities will continue until the end of 2016.