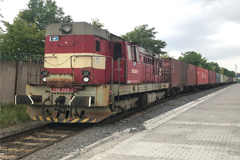 The service was organized by Kedentransservice JSC, PJSC TransContainer, ECONOMU SHIPPING JSC, Metallurgical Railway Line PKP LLC (PKP LHS) and ČD Cargo Logistics, a.s. by order of the Government of the Czech Republic. 46 x 40 foot containers with disposable protective medical clothing, masks, gloves and medical equipment arrived in the Czech Republic on June 14. The delivered cargo is intended for hospitals in Prague and Pardubice, and will be distributed to medical facilities in other regions of the country.
This service was conditioned by the need for guaranteed and prompt transportation of antiepidemic cargoes and was implemented on the basis of the current project for regular transportation of cargoes from China to Europe through Kazakhstan, Russia, Ukraine and Poland, launched in December last year.
Delivery time of container train cargoes from the departure station in China to its destinations in the Czech Republic was 15 days. At present, 2 more container trains with the cargo for medical use follow to the Czech Republic. Their arrival is expected not later than June 30.