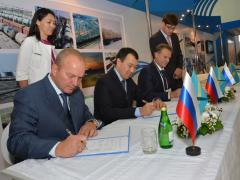 According to the signed document, the Kazakh side, represented by JSC «Kedentransservice», will provide comprehensive support to the Transport and logistics project «Yuzhnouralsky» in terms of cargo transportation from China to Russia. The organization of container shuttle transportation and support in the field of accelerated terminal cargo handling at the border were identified as specific measures of interstate cooperation at the initial stage.

The consent to the participation of the company Kedentransservice in this project played a key role in determining the optimal terms and prices for cargo transportation from China to the Chelyabinsk Region of the Russian Federation. To date, all cargo from China to the Chelyabinsk region is delivered either by sea (27,000 km in 53 days) or by land via the Trans-Siberian Railway (12,000 km in 36 days). The transit route through Kazakhstan reduces the distance to 3,100 km in 10 days.

As part of the investment project of the Yuzhnouralsky TLC, the Government of the Chelyabinsk Region also intends to build a transport and logistics complex on the territory of the Uvelsky district of the Chelyabinsk Region, which in turn will distribute cargo to both Russia and Europe. In the context of the Eurasian continent, the Yuzhnouralsky TLC will be another branch of the New Silk Road.

The company «Kedentransservice» will be engaged in transshipment of transit cargo on the Kazakh-Chinese border and leasing of rolling stock within the framework of the «Yuzhnouralsky» TLC.

The agreement of intent within the framework of the investment project was signed in Almaty as part of the Transit-Kazakhstan 2013 transport and logistics exhibition at the stand of the KTZ NC Group of Companies at the Atakent Expo exhibition center.